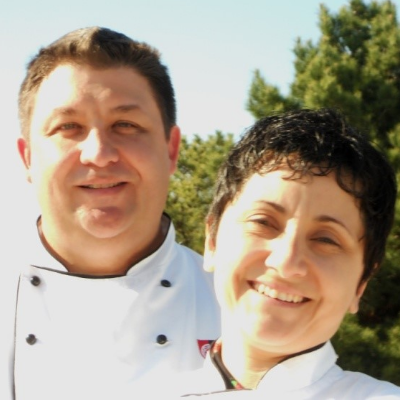 Robby and Victoria Hooker are a husband and wife team, making and selling fresh salsa and corn chips exclusively for the Coppell Farmers Market. Besides private chef services and in-home cooking lessons, Robby is the District Executive Chef for Lewisville ISD and Victoria is a Chef Instructor at Byron Nelson HS. This gracious and giving duo are also the brains and organizers of the annual Coppell Farmers Market Farm to Table Dinner, which features many local ingredients donated by market vendors.

Robby & Victoria Hooker
Victoria Hooker, CCC, CCE, MBA
Chef Victoria Hooker was born and raised in Albuquerque, New Mexico. She has always loved cooking, and grew up helping her mother and grandmothers in the kitchen. After graduating from high school, she moved to Charleston, SC, and attended Johnson & Wales University where she received her AOS in Culinary Arts and her BS in Foodservice Management. While she was in school she worked at Wild Dunes Resort and The Carolina Yacht Club. During her junior and senior years in college, she also worked at the university in the Fellowship program. Upon graduation, she was hired by Aramark as the Chef and Production Manager at The Citadel in Charleston. She later moved to Vail, CO and was the Sous Chef at Cookshack. She got married and moved to San Angelo, TX, where she was the Sous Chef at Bentwood Country Club. In 2002 she moved to Charlotte, NC, where she worked with Down Home Baking Company and began to teach at The International Culinary School at The Art Institute of Charlotte in 2005. She now resides in the Dallas area and started teaching as a Chef Instructor at The Art Institute of Dallas in 2009. In 2012, Victoria began to teach at Le Cordon Bleu. From 2013-2016 she served as Executive Chef at Southern Methodist University. Victoria is currently a Culinary Arts Instructor for aspiring young culinarians at Byron Nelson High School in Trophy Club, TX.

Robby Hooker, CEC, CCE, MBA
Chef Robby Hooker is a Texas native who has had a lifelong passion for food and people. He began his career in 1990 and has had the opportunity to work in various facilities which include hotels, free-standing restaurants, resorts, convention center, campus dining, corporate dining and NFL stadium food service settings. After receiving his AOS in Culinary Arts and his BS in Food Service Management from Johnson & Wales University in Charleston, SC. Robby served as Executive Chef in Colorado, Texas and North Carolina. While in Texas, Chef Hooker was responsible for establishing the Concho Valley Chef’s Association, a new chapter for the ACF, and was elected President where he served for two years. Robby became an instructor for The International Culinary Schools at The Art Institute of Charlotte in October 2003. He moved to the Dallas area in 2009, where he continues to be a Chef Instructor at The International Culinary School at The Art Institute of Dallas. In this position, he was able to encourage students to recognize their potential as food service professionals and future leaders in the industry. In 2014, Robby became the District Executive Chef for Lewisville ISD.